On February 13th the quest to catalog the aquatic habitats encountered by the Anza expeditions in California began. Research on the trail disclosed that portions, in fact some of the more interesting portions, are not accessible to our truck. Horseback is, however, an option. Riding a horse in the desert, it seems like one needs boots, and I didn’t have any that seemed right. After my usual fussing around I finally located a pair I wanted at a working-man’s store in Hayward. Their perfect fit and my happy toes were celebrated by driving directly to the nearest Anza camp site. 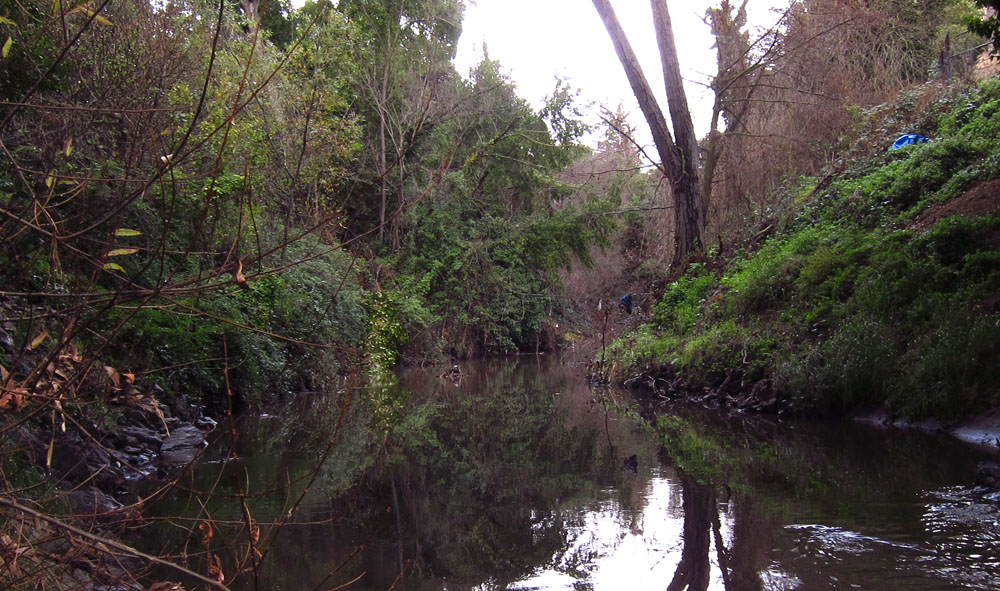 This site is where the monument to Anza’s camp had been located. The plaque is currently missing due to renovation of Anza Park, but that’s not the only problem. Anza’s expedition was traveling on horseback and heavily laden mules. Imagine getting horses and heavily laden mules down and back up that stream bank. We have the journals of Anza and the expedition’s padre Father Font, but like many of the campsites, the expedition left no physical evidence of their passing and the journals are not sufficiently specific to give the exact location, therefore some inference is necessary.

This image is high-resolution LiDAR topography of Hayward from USGS projected on Google Earth. The view is looking east (upstream) towards Castro Valley. The thin red line is the trace of the Hayward Fault.

The earliest routes originally trodden by Indians and later by the arriving explorers, missionaries, and rancheros were typically far enough up from San Francisco Bay to avoid salt marshes and other miry lowlands, but far enough down the piedmont so as to avoid foothills and deeply incised stream channels. Mission Blvd. is one such route. Of course, there was no bridge over the creek as appears in the LiDAR image, but the creek channel would have been much easier to cross there than upstream at Foothill Blvd.

The creek at the likely campsite is in an inaccessible concrete culvert, which raises a problem – the relevance of an ecological characterization of what Anza saw. Consequently, the ecological workup will characterize the nearest remaining natural stretch, right back where the historical monument was placed.

Next week we depart for the California/Mexico border where we will begin following the Anza Trail in earnest. Stay tuned to this blog for dispatches from the field.